My diminishing suitcase packing list for a Europe holiday in earlySpring

Well I'm here in France! I never got to publish my packing list before we left Australia, because as per usual I was too busy with work and sick (yes again! This time with the flu) before we left. I guess now I can add some preliminary notes.

Packing light for just over a month away is no mean feat for some one who enjoys dressing up... but it's very important for someone who also enjoys to shop whilst away.

What worked really well for me back in 2012 when we traveled to the USA, was packing a diminishing suitcase. This means, that apart from the staples, I also packed a few items that were on their last legs.

I did the same on this occasion and specifically 'saved' a few bits and pieces from my recent wardrobe cull to take with me, so that as I travel across Europe acquiring new stuff, I will get rid of this old stuff hence making room in my suitcase.  It's also a really good way to just get rid of worn out pieces that you find yourself clinging onto, even though honestly the items belong in the bin.

My packing list (items in red text are the pieces destined for the bin):

* After walking 20 km around Nice and Monte Carlo I have decided I need to buy sneakers. Walking on cobble stones and up a million stairs is a bit different than walking the streets of New York...

Miscellaneous/Accessories
That's it.  In case you are wondering the above list includes what I wore on the plane.
Published by mycatssaymeow on Tuesday, March 25, 2014 2 comments:


We depart for our holiday in less than a week! First off, I'm publishing my toiletries and makeup packing list.  Of course these packing lists will be different for everyone, depending on what products one uses, but they are a good start.

Back in 2012 when I holidayed in the United States, I only packed sample sizes or almost finished cosmetics.  This turned out to be a great idea given that within 24 hours of our plane landing I found myself in Sephora hemorrhaging money.

Our first stop on our Europe itinerary is Nice, France, and well, I can almost hear the French pharmacies calling my name in the distance...  I will be packing very lightly in the skincare department, knowing that I will certainly buy a few new products in France.

When it comes to makeup, I plan to play it safe and pack the items I use on daily basis here at home.

Concealer.  I can't live without my Ellis Fass concealer...

Hourglass Ambient Lighting Powder palette.  This is one of my favourite recent purchases.  I have fair skin, so the powders in this palette work for me as a setting powder, highlighter and bronzer.

Eyeshadow.  I'm taking my Clinque Chubby Stick in 'Ample Ambre' (a favourite), my NARS shadow pencil in 'Skorpios' and Laura Mercier Caviar Eye Sticks in 'Amethyst' and 'Sugar Frost'.  These four colours will create a lot of looks and the products require no brushes for application.

I am packing the bare minimum make-up brushes with me - just the MAC 187 duo fibre brush which I use for powder and a Tarte blush brush.
Published by mycatssaymeow on Monday, March 17, 2014 2 comments:

In less than two weeks my boyfriend and I will be relaxing somewhere in Europe... 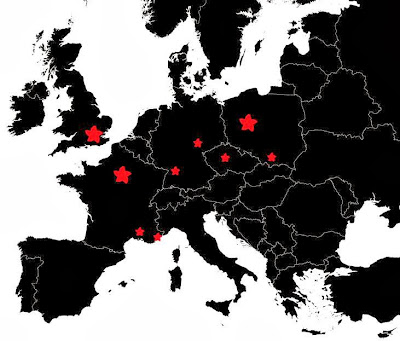 We have been planning (read: talking about) this holiday for many months. We got to a point in mid January that nothing was booked so I called our travel agent to make it happen. Now all of a sudden, it's happening. We leave in a matter of days and and I'm starting to get nightmares about:

1. My boss telling me at some stage prior that I can't take the time off work anymore
2. Forgetting to pack something really important
3. Forgetting to pack altogether
4. Misplacing my passport somewhere in the house
5. Being stuck in traffic on the way to the airport
6. Missing the plane altogether

I hope that none of the above mentioned travel disasters occur and that instead I finally get to try Pierre Hermé macarons.  Back in 2012 I tried Ladurée's offerings in New York and was left a little bit disappointed. Pierre Hermé macs better blow my mind!

So now to get through the next fortnight of work without tearing out our hair and/or working until 10pm in the days leading up to our departure.  I also need to get around to booking the rest of our accommodation and internal train travel - yes we are this unorganised!
Map sourced from: www.worldatlas.com
Published by mycatssaymeow on Monday, March 10, 2014 8 comments:

When I'm not culling my wardrobe, I'm shopping to add more to it.

I have a genetic predisposition to hoarding, but I'm positive that I'll one day become a minimalist.

I treat my two Devon Rex cats like they are my human children.